More than 40 years
With knitting & yarn

At Isager we have a long history that we are very proud of – it all started when Åse Lund Jensen (1920-1977) and a very young Marianne Isager met at Skals Håndarbejdsskole, today known as Skals – Højskolen for Design og Håndarbejde (Skals – School of Design and Crafts).

Åse Lund Jensen became one of the 20th century pioneers in the textile arts and crafts. Åse Lund Jensen’s pioneering efforts concentrated on hand knitting and its spread as an independent genre within the textile arts and crafts in Denmark. In terms of design, Åse Lund Jensen took her starting point in the Nordic, especially the Danish, knitting tradition with the many beautiful and distinctive models that she further developed and gave an independent, design-personal expression. Her models were made on a high artistic and technical level, and she developed new and more contemporary yarn types and colors inspired by plant colors in muted and mutually matching colors, which she thought dressed Danish consumers far better than the existing bright  colors in knitting yarn.

In 1960 she established her own workshop, where she created collections of hand-knitted models, which were sold as finished models at Den Permanente. At the time, she had about sixty knitters working. Gradually, the customers wanted to knit themselves, and so she began a larger educational work, and in this area she made a pioneering achievement. She published a number of knitting books which are still useful today because of their clear, logical structure and aesthetic design. Today, the books are regarded as classic knitting literature. Åse Lund Jensen thus left a significant legacy in Danish textile arts crafts when she died too early in 1977.

Before her death in 1977, knitwear designer Åse Lund Jensen handed over her business to 23-year-old Marianne Isager, who at the time was a student on the textile line at Skolen for Brugskunst in Copenhagen. The daughter, Helga Isager, was only 3 months old and today it is mother and daughter who run the yarn company Isager, which has its roots in northern Denmark.

In 2017, Marianne and Helga celebrated the company’s 40th anniversary by amoung other things,  publicating the book: “ÅLJ Åse Lund Jensen – a Danish knitwear designer.” The book shows a number of models with inspiration from Åse’s own models, but the book also tells the story of Åse Lund Jensen and her great importance for Danish knitting design. This also includes Marianne and Åse’s relationship and how Marianne came to carry on the legacy from Åse – everything is illuminated eg. through their rather extensive letter-correspondence. The book also gives an insight into the Danish knit story in general, from chicken knit to the Pusse Hat project. 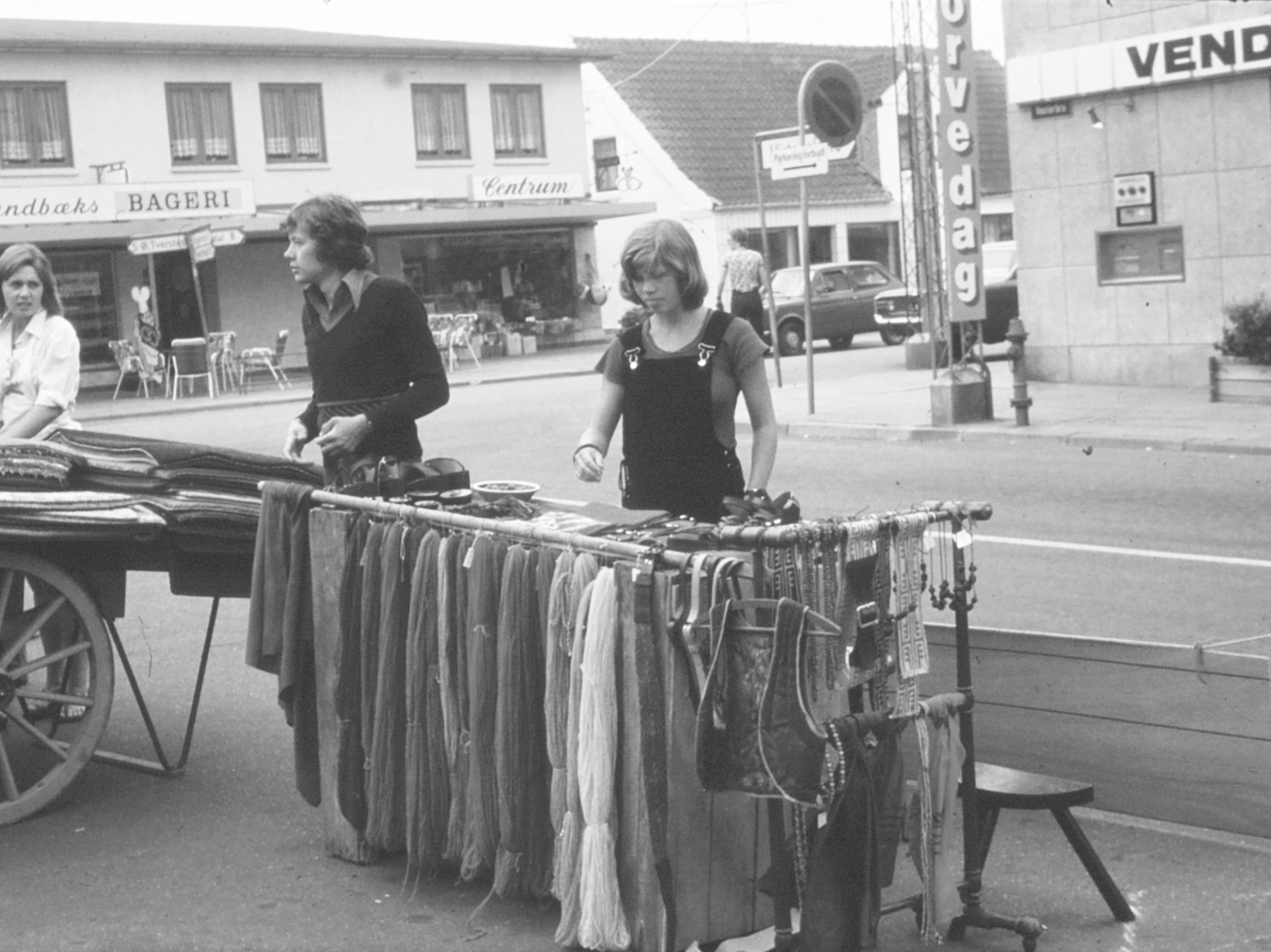 Marianne Isager in place with yarns and homemade goods at Torvemarked i Bindslev, 1974.

Be critical when purchasing yarn.
It is a great job to knit a jumper and it is a shame to see it crawl and “wooly” after a few washes. Rest assured that the old rule “cheap yarn is the most expensive” also applies here. In terms of beauty, the good yarns also look far finer than the coarse, cheap yarns with scratchy colors.

Åse told me that the reason for her desire to get her own yarn was primarily to get a more consistent color range, but also because the yarn she used was too heavy. When an ordered sweater was to be shipped to the United States, the weight ended up just over 1 kg and it became too expensive in postage. She contacted Henrichsen’s Woolspinderi, where she could buy a fine 3-thread woolen yarn, but the color range was inadequate.

Åse and her friend Karen explored plant colors, and here they found the color range that we largely still have intact today. Each color was made in 3 shades: a light, a medium and a dark, as seen in colors 17, 19 and 27. It is clear to see the inspiration from indigo, madder root, cochineal, and all the yellow and green hues we get with staining from plants in the Danish nature.

In use, the color range has proven to be great to work with. It almost doesn’t matter what colors are put together. The finished work is fine.

Over the years, we have expanded the color range in respect to the starting point, and we have also added new yarns, but it is the same color numbers used.